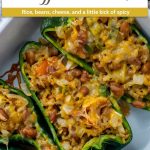 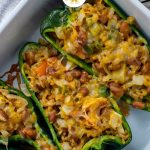 If you like spicy foods, then Taco-Stuffed Poblano Peppers is the perfect meal! Delicious taco filling in an open pepper for a kick of heat!

When we do our local fruit and vegetable co-op, we never know what we are going to get. One of our baskets recently had a bunch of poblano peppers in it. So we decided to make some Taco-Stuffed Poblano Peppers.

I don’t eat many peppers, usually just bell peppers. Even though I like the taste, spicy foods don’t agree with me. I wasn’t setting out to make a spicy dinner, but this ended up very spicy.

Justin really enjoyed it, but it was too much for me. For that reason, we didn’t even give any to the boys.

The poblanos themselves didn’t have much heat, but the filling sure did. So, if you agree with my mom, the spicier the better, then this recipe is for you.

Now, if you don’t like spicy, then you may want to try a different filling. I really don’t know what made it so spicy. None of the ingredients are really spicy in themselves, but it must have just been the combination.

I tried to eat it; I really did. Even after smothering mine with cheese and adding some sour cream I just couldn’t do it. That being said, Justin ate all of his that night and reheated some the next day.

So, just because I wasn’t able to eat this particular recipe, doesn’t mean you shouldn’t try. And it doesn’t mean I won’t try stuffed poblanos again, just with a different filling next time.

If you don’t like spicy, you can always try some Taco-Stuffed Bell Peppers. They are milder than the poblano peppers.

Preheat the oven to 400F and chop up all of your vegetables. Prepare the rice according to the directions.

In a large skillet, over medium heat, warm the oil. Then add the onion, bell pepper, and minced garlic. Let this cook for about 10 minutes so it gets really soft.

In a large mixing bowl, combine the cooked rice, beans, and chopped tomato.

Then add the onion mixture from the pan, along with all of the seasonings.

Pour in half of the cheese. Stir until everything is well mixed together.

Place the halved peppers with the sliced side facing up in a baking dish.

Fill each with a few scoops of the filling mixture and top with the remaining cheese.

Bake the stuffed peppers for about 20-25 minutes, until they are soft. You want the cheese to be melted but not start to brown. Serve your Taco-Stuffed Poblano Peppers immediately. 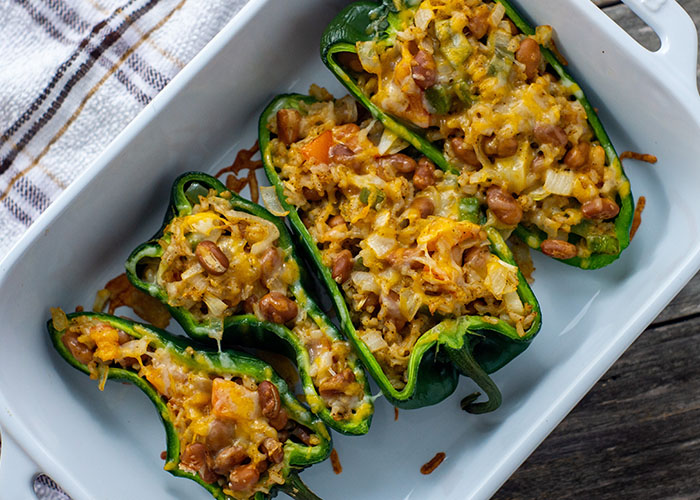