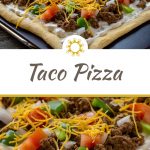 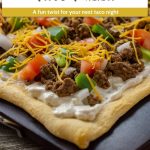 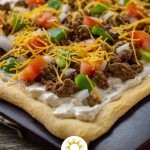 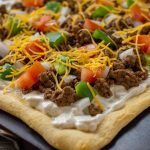 Make your own Taco Pizza for a quick and easy family meal or as a warm appetizer that can be customized to your own tastes!

Tacos and pizza are both favorites at our house. So one evening we decided to try to combine them into Taco Pizza! And no, it isn’t just getting beef on a regular pizza. I wanted it to truly combine the best of both meals.

Taco Pizza uses a pizza crust with typical taco fillings on top. Instead of red sauce, I used a combination of cream cheese and sour cream. The cream cheese helps to thicken up the sour cream without adding too much flavor. I was worried that having only sour cream would be too thin and the toppings would fall off.

Other than that, we made the rest of the toppings for this Taco Pizza in the same way we would make it for regular taco night. Similar to tacos, you can make this pizza customized for each person depending on which toppings they prefer.

The pieces you see photographed were Justin’s because he will eat it with everything on top! I don’t like fresh tomatoes, so mine didn’t have that. For the boys, we did only a very small amount of each vegetable in an attempt to get them to eat something new. Spoiler alert: they still weren’t very fond of this meal. But, we are working on it.

For simplicity and time management, I used prepackaged pizza dough. When I don’t make my own dough, I buy the one canned near the biscuits at the grocery store. It isn’t quite as fluffy and delicious as homemade, but it’s much quicker when I don’t have time for the bread machine to make the dough.

I’ve been making my own taco seasoning. The flavor is a bit different from the store-bought, but it’s much cheaper and saves on a lot of packaging waste. I make this in a large amount and then use what I need. The rest stays stored with all of my herbs and spices.

Taco Pizza makes a great dinner for the family. Or it can be used as an appetizer. Also, if you don’t like ground beef, you could also sub in other taco fillings such as shredded chicken or beans.

Bake the pizza crust according to the directions. Let it cool for about 20 minutes.

Meanwhile, in a medium skillet, brown the ground beef over medium-high heat.

Drain the ground beef and return it to the pan. Stir in the water and 2 tbsp of taco seasoning, then bring to a boil, stirring occasionally.

Reduce the heat to a simmer and cook, uncovered, for about 5 minutes, stirring often, until most of the moisture has evaporated.

In a medium mixing bowl, combine the sour cream, cream cheese, and 1 tbsp of taco seasoning. Stir until they are completely combined. It’s ok if there are a few lumps.

Once the crust has cooled, spread the sour cream “sauce” over the pizza crust, covering it all the way to the edges.

Sprinkle the cooked taco meat over the sauce. It may not completely cover, which is ok. Just try to spread it out as evenly as possible.

Top the ground beef with your favorite taco toppings, such as cheese, lettuce, tomatoes, onions, etc.

Cut into pieces about 2-inch square and serve immediately. 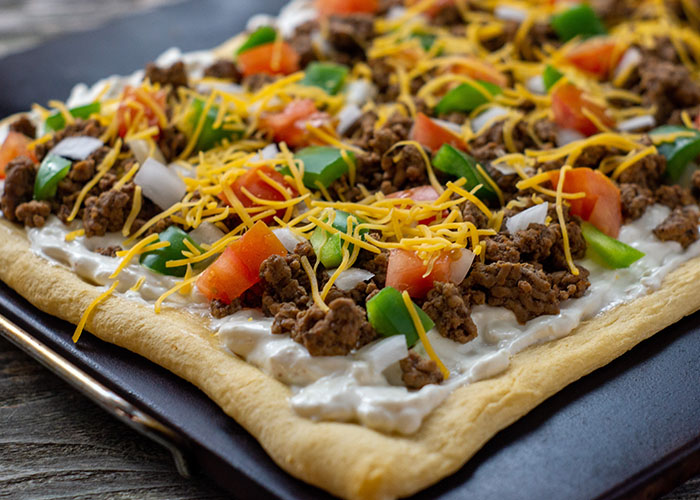