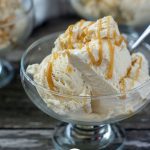 If you can’t make it to Florean Fortescue’s Ice Cream Parlor in Diagon Alley, then this homemade no-churn butterbeer ice cream is for you!

Florean Fortescue’s is known for its ice cream throughout the wizarding world. He has a shop on Diagon Alley and has almost any flavor of ice cream available. Only a few are ever mentioned, but butterbeer is such a popular drink, I’d like to think that Fortescue’s would have a butterbeer ice cream.

Harry didn’t have to do his homework under the blankets by flashlight anymore; now he could sit in the bright sunshine outside Florean Fortescue’s Ice Cream Parlor, finishing all his essays with occasional help from Florean Fortescue himself, who, apart from knowing a great deal about medieval witch burnings, gave Harry free sundaes every half an hour.

-Harry Potter and the Prisoner of Azkaban

When I made butterbeer and needed a homemade butterscotch syrup. It made a lot more than I needed for that recipe so I decided to make ice cream with it. The entire recipe was new to me because I had never made ice cream at home. There’s an attachment to the stand mixer to make ice cream that I want, but I don’t have it yet. I received it as a Christmas gift from my parents, so we will be trying new ice cream recipes soon!

Because I didn’t have any fancy equipment when I made butterbeer ice cream, this is a no-churn recipe. It’s very easy to put together. The hardest part is waiting to eat it while it freezes!

Whip the heavy whipping cream in a stand mixer until it forms stiff peaks.

Then pour in the sweetened condensed milk and mix until it is thick and fluffy.

Drizzle a bit more butterscotch syrup over the top and use a toothpick to swirl it around.

Place the ice cream in the freezer and let it set for at least 8 hours or overnight. When you scoop the ice cream to serve, you can add a bit more butterscotch syrup to the top if you have any leftovers. 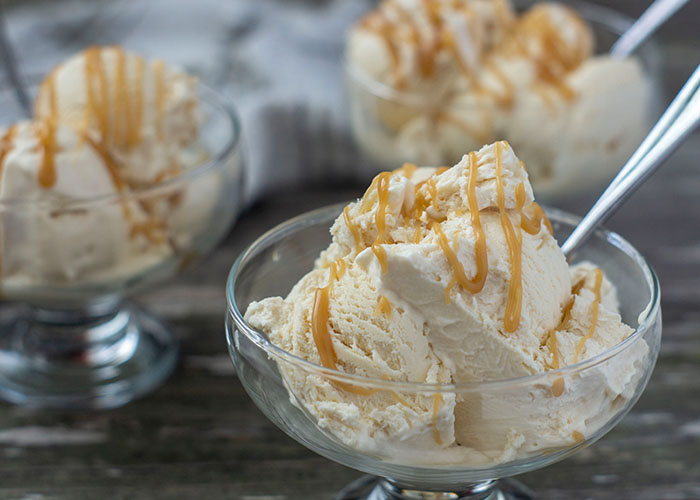