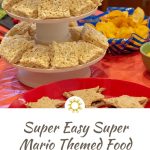 If you have someone who loves video games, then these super easy (mostly healthy) food ideas are perfect for a Super Mario themed birthday party.

One of my favorite parts of hosting a party is finding a way to make my food fit the theme. Honestly, I would be ok without any decorations, as long as the food is themed to the party. I get excited when we have a birthday party or get-together that I can work the food into the “decorations”.

This year, Ryan has really gotten into playing on the WiiU and wanted to have a Mario birthday party for his fourth birthday. Of course, as it got closer he started playing Donkey Kong and Kirby more, but I wasn’t changing it a week before the party. Overall, he still loved his Super Mario birthday party and had a lot of fun with his friends.

We had a few decorations of streamers around the house, and the dishes were color-coordinated with the main Mario colors (red for Mario, green for Luigi and Yoshi, blue for Toad and Rosalina, and pink for Princess Peach). But, the theme was most obvious in the food.

If you want to see other ideas that I’ve done for themed birthday parties, check out these posts:

Not to mention, all of the Harry Potter-themed food we made all of last year when we had monthly Harry Potter Club at our house!

As you can see, themed food is such fun for me. I’ve always loved Mario games, and Nintendo has always been my favorite console. So, I had a lot of fun coming up with Super Mario themed food for Ryan’s birthday party.

When have you ever left Miss Stephanie’s house hungry?

My friend to her daughter who was getting “hangry” when they got to the party.

Ryan’s birthday party was at 3 pm, but I still wanted something that people could eat for something a bit more filling. Since almost all Mario games are based on collecting stars in one way or another, I decided to go with star-shaped sandwiches. Once I started making them, I wished I had a cookie cutter in the shape of a star, but I will remember that next time.

For dessert, we had the birthday cake. But I wanted something extra for those who don’t care for cake. And, I’ll admit, because I loved this easy idea and wanted to make it. In Mario, there are “? Blocks” that you can hit to give coins, power-ups, and other items in the game. I decided that we could make some Rice Krispie Treats, since they are already a yellow color, and add a question mark with icing. Looking back, I wish I had added a little yellow food color gel to make them really yellow and the question mark stand out, but everyone still understood what they represented. I used my new (to me) cupcake stand to hold the Rice Krispies so they would take up less space on the counter.

At every party, there’s always junk food, but you have to balance it with some healthy foods. I like doing a fruit and veggie tray at parties because almost everyone will eat something off the tray. And for those with allergies, they are usually safe food. In the past, I’ve made them look like monster faces and Ninja Turtle faces, or put it all into a dump truck. For the Mario party, I decided to make them look like the fire flowers that you can get in the games to have the character throw fireballs at enemies. There is also ice power, but I couldn’t think of enough blue fruits that everyone would eat to do one of each.

This was the first year that I didn’t make a cake for Ryan’s birthday party. I was going to attempt one in the shape of Mario’s head, but my father-in-law saw a Mario Kart cake at our local HEB and asked if he could get that for the party. Since it was a crazy week for us even before the party, I decided to give in this time and go with a store-bought cake. Although, Tyler says he may want a Mario birthday party this year, too, so I may get to make the cake still.