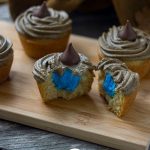 If you’ve ever wondered which Hogwarts House you would be sorted into, then wonder no more with these delicious and fun Sorting Hat Cupcakes!

Have you ever wondered which Hogwarts House you would be sorted into? Admit it, how many times have you done a Sorting Hat quiz? I have more times than I can count, and it’s never consistent for me. I always waver between Gryffindor and Ravenclaw but I have also gotten the occasional Hufflepuff. Wonder no more, because these Sorting Hat Cupcakes can help you get sorted while enjoying a sweet dessert at the same time!

I’ve seen “gender reveal” cakes or cupcakes made with either pink or blue frosting inside. So I thought I would try something similar. But I hid red, blue, yellow, or green frosting inside the cupcakes.

For those who aren’t as savvy when it comes to Harry Potter, the houses and colors are as follows:

Scarlet isn’t an easy color to make. So I used red for my sorting hat cupcakes.

You might belong in Gryffindor,
Where dwell the brave at heast,
Their daring, nerve, and chivalry
Set Gryffindors apart;
You might belong in Hufflepuff,
Where they are just and loyal,
Those patient Hufflepuff are true
And unafraid of toil;
Or yet in wise old Ravenclaw,
If you’ve a ready mind,
Where those of wit and learning,
Will always find their kind;
Or perhaps in Slytherin
You’ll make your real friends,
Those cunning folk use any means
To achieve their ends.

To make my Sorting Hat cupcakes, I used a recipe found here for a regular white cake. I’ve made a chocolate cake and yellow cake many times, but never a white cake. I wanted to make sure the colors were very noticeable in the cupcakes. The cake recipe is pretty straightforward. It’s similar to most other cake recipes.

For the frosting, I used a recipe that I was given by a friend many years ago for a buttercream frosting. I divided that into 5 bowls then colored them with red, green, blue, yellow, and a brown one to go on the top (same color as the Sorting Hat).

Preheat the oven to 350F. Grease a cupcake or muffin pan.

In a medium mixing bowl, cream together the sugar and butter. You can do this with an electric hand mixer, or use a stand mixer as I use for just about everything in the kitchen.

Beat in the eggs and the vanilla extract.

Add the flour and baking soda until it forms a cake batter. Scrape the sides of the bowl while mixing to make sure everything gets mixed in properly.

Pour in the milk. Stir until the batter is smooth.

Fill the cupcake pan about 2/3 full and bake for 15-20 minutes, or until the cupcakes turn golden brown and a toothpick comes out clean.

Let the cupcakes cool completely. While they are cooling, make your frosting by mixing the vegetable shortening and butter until they are light and fluffy.

Add the vanilla, then gradually stir in the powdered sugar. Make sure to scrape the sides as you mix. The frosting will appear dry.

Slowly add in the milk, one tablespoon at a time, until you have your desired consistency.

Separate the frosting into five bowls. One bowl needs about 2/3 of the frosting, then divide the rest between the other four bowls. Add a couple of drops of food coloring. The bowl with the most frosting needs to be brown. I always use Wilton gel colors because they give better color and are easier to work with. The ones I used are called Moss Green (Slytherin), Lemon Yellow (Hufflepuff), Sky Blue (Ravenclaw), Christmas Red (Gryffindor), and Brown (for the Sorting Hat).

Use the brown frosting to cover the tops of the cupcakes. I found piping this worked well because that doesn’t risk spreading any of the house colors with the frosting on the top.

Then put a Hershey’s Kiss on top to represent the pointed hat.

Serve these to family and friends then have fun biting into them to see which house you have been sorted into! 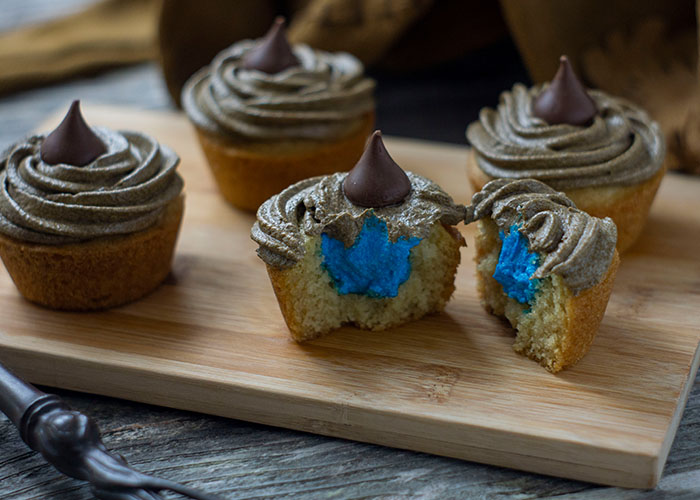