If you visit Hagrid, you will likely get offered rock cakes. While his may break your teeth, these soft biscuits are much more enjoyable.

Rock Cakes are a specialty of Hagrid’s that he always has available when Harry visits his hut. They are described as similar to a fruitcake. But they are rock hard and can crack your teeth if you aren’t careful. Of course, I didn’t make mine rock hard. Dental insurance costs enough, I didn’t need any broken teeth to deal with!

The rock cakes were shapless lumps with raisins that almost broke their teeth, but Harry and Ron pretended to be enjoying them as they told Hagrid all about their first lessons.

Hagrid, the Hogwarts gamekeeper, had obliged with a sack full of his own homamde rock cakes. (Harry hadn’t touched these; he had had too much experience of Hagrid’s cooking.)

Finally he slammed down three bucket-sized mugs of mahogany-brown tea in front of them and a plate of his rock cakes. Harry was hungry enough even for Hagrid’s cooking, and took one at one.
…
…he had abandoned the rock cake after an ominous cracking noise from one of his back teeth.

I looked at a few recipes for fruitcake since I knew they were similar. I found a recipe here on a popular fansite called Mugglenet but tweaked it just a bit. There was too much flour making these a bit too crumbly and I could taste the flour at times. So we lowered that just a little.

I want to try again and put some strawberries or blueberries in with the raisins, but I haven’t had a chance yet. I guess that would also make it a fruitcake rather than the rock cakes I set out to make.

Once you have the dough made, these are formed like a drop biscuit, which gives them their distinct “shapeless lumps” look. Also, don’t forget the cinnamon-sugar. I did on one batch, and it wasn’t quite the same.

To make Hagrid’s rock cakes, preheat the oven to 400F. Grease a large cookie sheet or preheat a baking stone.

In a medium-sized bowl, sift the flour, salt, and pumpkin pie spice together.

Cut the butter into the flour with a pastry blender or two butter knives.

Stir in the sugar and raisins.

In a separate medium-sized bowl, whisk the eggs and milk together.

Pour the egg mixture into the bowl with the flour mixture and use a large wooden spoon to stir it into a dough. It won’t be smooth, but make sure there are no lumps of flour. Just don’t overmix or the cakes may become rock hard when they bake.

Use a spoon or your hands to grab small portions of the dough out and drop it onto the prepared cookie sheet or stone. They don’t have to be perfect and don’t smooth them out. Just try to get them all about the same size so they cook evenly. In a small bowl, mix the sugar and cinnamon. Sprinkle that over the rock cakes and bake for about 12-15 minutes, until they start to turn golden brown.

Transfer the cakes to a wire rack to cool.

They can be saved in an airtight container for up to two days, and make a great breakfast. 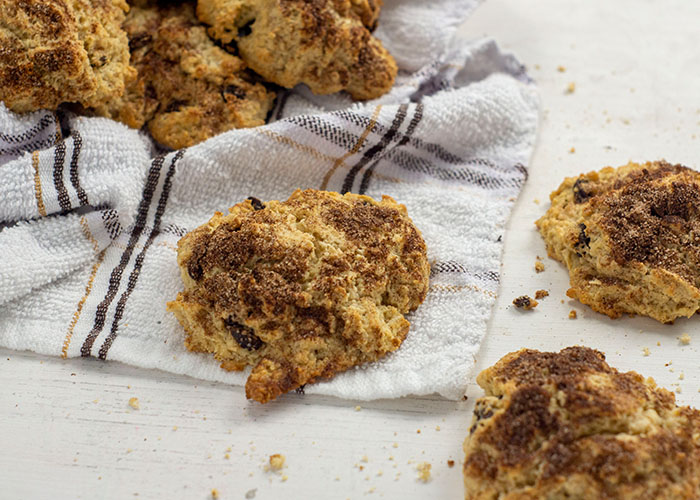 34 thoughts on “Rock Cakes that Won’t Break your Teeth”