Skip to content
104shares
General Tso's Chicken is a popular meal when eating out at a Chinese restaurant, but it is so easy to make at home and tastes delicious!
Step by Step
View Recipe
Shop Recipe

I’ve always seen that little spicy icon next to General Tso’s Chicken on a menu, and it scared me away from trying it. I don’t get along with spicy foods. When Justin found this recipe he wanted to try, I figured I would give it a chance.

Making recipes at home gives me the opportunity to modify it so that it works well for our family. I knew the boys wouldn’t want this with the spicy sauce on it. After I cooked the chicken, I set aside a few pieces for them before putting it in the sauce.

Funny story about this recipe: I tried to make it one night, and didn’t realize that I only took out one chicken breast instead of two. It let us get a taste of the recipe, and we both liked it. But it was nowhere near enough to make a meal out of it. And I forgot to cook the rice. And Justin wanted red pepper in it that I forgot as well.

Since we knew we liked the flavor, we said we would try again in a few nights. We were extremely pleased with the meal. After we made it with everything we wanted. And made enough of it!

The original recipe doesn’t say to make it with rice. But it’s a little plain without it as we learned the first night. The photos showed the chicken on a bed of white rice. I always cook with brown rice, so I made that instead. The recipe doesn’t have red pepper in it either, but Justin wanted that. It did add a lot to the flavor of the dish (not to mention gave us a bit of in the dinner).

I started by preparing the rice in my rice steamer. Cut the chicken breasts into bite-sized chunks and coating them with cornstarch. It took about 1/4 cup of cornstarch. This was the first time I had ever used cornstarch as a breading. I liked the texture that the chicken had much better than breading with flour or breadcrumbs.

Add some oil to a frying pan and cook chicken. Turn the chicken a few times until it is cooked through. This took about 10-15 minutes for me, and I had the oil at a medium temperature. I hate when the oil splatters, so I prefer to slowly fry foods instead of turning the heat up quickly.

As the chicken cooks, whisk together the rice vinegar, soy sauce, hoisin sauce, water, sugar, and cornstarch to form the sauce. I found that it settled a bit as it sat waiting, so made sure to stir it every so often. Hoisin sauce is found in the same aisle as the soy sauce. Rice vinegar will either be near those foods as well or near the other kinds of vinegar in the store.

After the chicken has cooked, remove it from the pan. Put it on a cooling rack so the oil can drip off. Hint: place a towel or paper towels under the rack to help catch the oil for easier cleanup later.

Either drain the oil or use a different pan if you don’t want to move the hot oil. If you remove it, leave about a tablespoon to cook the garlic in. If you use a new pan, add one tablespoon of oil to the pan and warm the oil. Add the cayenne, ginger, and garlic to the oil and stir for about 30 seconds.

Add the diced red peppers to the pan and cook for a minute or two to soften slightly. Then add the chicken as well as the sauce (after giving it a quick stir). Coat the chicken with sauce by stirring continuously for one minute.

Serve the General Tso’s Chicken warm over rice and add a few sesame seeds to garnish. 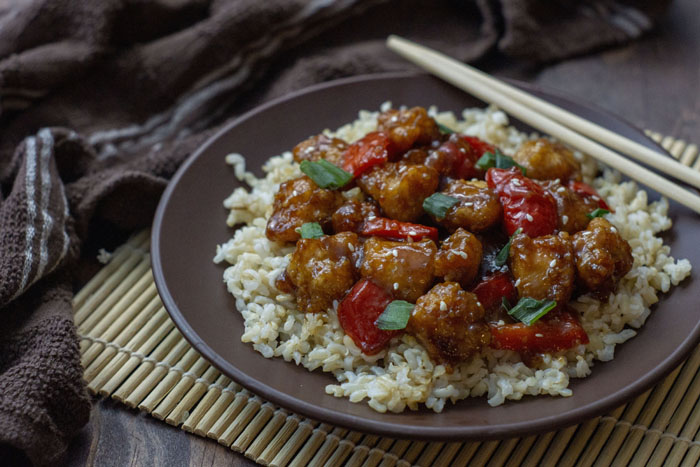 When making any recipe, it’s essential to make sure you have the correct equipment. The following items are hand-selected for this recipe and are all items I have personally used and/or recommend.