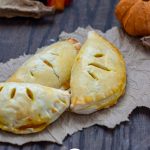 Pumpkin Pasties can be purchased on the Hogwarts Express, and can also be made from pumpkin puree and pie crust from home for an appetizer.

The Honedukes Cart on the Hogwarts Express was Harry’s first glimpse into all the wonderful, magical foods that the wizarding world has to offer. One of the many things he got on his first trip was some pumpkin pasties. I had no idea what that was. I kept reading, though. It’s a magical world, so it’s possible it was made-up. Harry bought one of everything off the cart and shared with Ron Weasley.

He [Harry] had never had any money for candy with the Dursleys, and now that he had pockets rattling with gold and silver he was ready to buy as many Mars Bars as he could carry – but the woman didn’t have Mars Bars. What she did have were Bertie Bott’s Every Flavor Beans, Drooble’s Best Blowing Gum, Chocolate Frogs, Pumpkin Pasties, Cauldron Cakes, Licorice Wands, and a number of other strange things Harry had never seen in his life. Not wanting to miss anything, he got some of everything and paid the woman eleven silver Sickles and seven bronze Knuts.
…
“Go on, have a pasty,” said Harry, who had never had anything to share before or, indeed, anyone to share it with. It was a nice feeling, sitting there with Ron, eating their way through all Harry’s pasties, cakes, and candies…

As you can see, there’s not much to base a recipe off of from that description. As far as I know, that’s the only mention of Pumpkin Pasties in the books. In the movies, Cho Chang buys some from the cart in Goblet of Fire. But you still don’t see them or get any better description.

When I think of pastry, I think of pie, so the base of the pastry is a pie crust rolled out. And instead of using a fresh pumpkin as some recipes suggested, I used canned pumpkin. If I was making these in the fall when pumpkins are readily available, I might have tried fresh pumpkin. But when I originally made these back in January, that wasn’t much of an option.

To start, preheat the oven to 400F. In a large mixing bowl, mash the pumpkin puree with the softened butter, until it has a similar consistency to mashed potatoes.

Stir in the minced garlic and shredded cheddar cheese. Season the filling with salt and pepper.

Make sure your pie crust is thawed. Use a rolling pin to flatten it out on a lightly floured surface to about 1/8″ thickness.

Use a round biscuit cutter or dough press to make circular cuts in the dough. Reroll the scraps and continue until you run out of workable dough.

Fill each circle with about one or two tablespoons of the pumpkin filling. The amount will depend on how big of circles you make. I wanted to have enough for everyone, so I made mine small. But you can make them much larger if you are only making them for a couple of people.

Fold the circles in half and crimp the edges to seal. Repeat this with all of the dough circles and place them on a cookie sheet lined with parchment paper or baking stone. Use a sharp paring knife to cut three slits in the tops for ventilation (and they look cool!). Coat the pasties with an egg wash and bake for 25-30 minutes, until the crusts turn golden brown.

Transfer to a cooling rack and let them rest for about 5-10 minutes before serving. Trust me, the pumpkin and cheese get very hot in the middle! 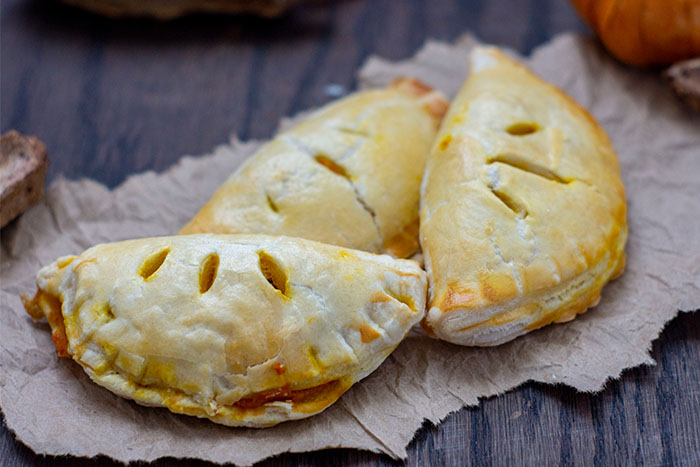 Pumpkin Pasties can be purchased on the Hogwarts Express, and can also be made from pumpkin puree and pie crust from home for an appetizer.
Prep Time 15 minutes
Cook Time 30 minutes
Total Time 45 minutes
Course:
Appetizer
Cuisine:
American
|
British
Keyword:
pastry
|
pumpkin
Servings: 15 pasties
5 from 6 votes

34 thoughts on “Pumpkin Pasties from the Hogwarts Express”