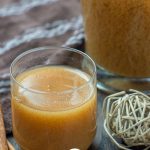 Pumpkin juice seems to be the favored drink among wizards, and after making our own at home with only 5 ingredients, I understand why!

When I first read about pumpkin juice, I was a little unsure. Orange juice? Sure. Apple juice? Love it. Pumpkin juice? Ummm….. is that really a thing? As with quite a few of the foods and drinks in the Harry Potter series, this is one of those that is more popular in the UK than it is here in the US.

He [Harry] had stopped noticing the fantastic cloud shapes now and was thinking longingly of the train miles below, where you could buy ice-cold pumpkin juice from a trolley pushed by a plump witch.
…
A large plate of sandwiches, two silver goblets, and a jug of iced pumpkin juice appeared with a pop.

But unless you watch your step, you might just find that my hand slips” – he shook the crystal bottle slightly – “right over your evening pumpkin juice…”

And, according to the Harry Potter books, it’s something that’s had at breakfast, at lunch, at dinner, and with snacks… Apparently, pumpkin juice is consumed at all times of the day, and it seems to always be chilled or iced.

Ok, well then, let’s give it a shot! Pumpkin juice was one of the recipes I made for our first Harry Potter Club night at my house. I had no clue how it would turn out, but we made an entire pitcher full of it!

I’m not a big pumpkin person so I don’t go crazy when the coffee shops release their pumpkin spice everything. But I do enjoy it now and then, especially pumpkin pie. Justin, on the other hand, loves pumpkin flavored anything and was a huge fan of this drink!

And the best part? It was one of the easiest Harry Potter recipes I’ve made! Because of that, I didn’t take any photos while making it. You just pour everything into a pitcher, stir, and serve over ice. I’m not kidding; anyone can do that.

There are only five ingredients in the main drink: apple cider or apple juice, pumpkin puree, sugar, pumpkin pie spice, and vanilla extract. I also had a few cinnamon sticks that could be used to stir the individual drinks if they wanted, but it isn’t necessary.

I have a hard time finding apple cider at the store because it wasn’t Thanksgiving or Christmas time here. We had an unopened container of apple juice so we subbed that instead. Next time I want to try with the cider because it will probably be even smoother and have more apple flavor, which I would like. I used apple cider, and it was even better. But, if cider is too strong for you, stick with the apple juice.

First, pour whichever apple drink you choose into a pitcher. Then empty the can of pumpkin puree into the juice. Finally, add the sugar, spice, and vanilla extract. I used a wire whisk to give it a good stir, but a spoon would do the trick. Pour the drink over ice and serve! 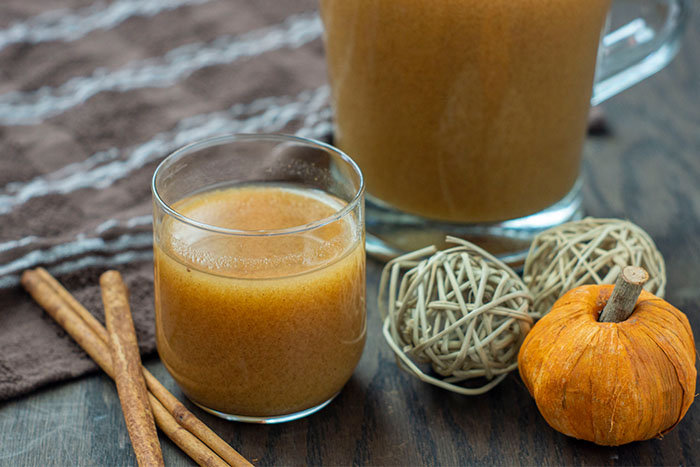 Pumpkin juice seems to be the favored drink among wizards, and after making our own at home with only 5 ingredients, I understand why!
Prep Time 5 minutes
Total Time 5 minutes
Course: Drinks
Cuisine: American, British
Keyword: Harry Potter, pumpkin
Servings: 16 cups
5 from 10 votes