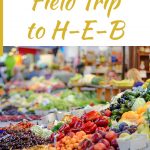 H-E-B is one of the biggest grocery stores in Texas and their employees gave our preschoolers a wonderful tour on their field trip!

I never thought that a field trip to a grocery store could be so exciting, but I had a great time when Tyler’s class went to H-E-B (our local grocery store). This is the store that’s closer to his school, so not the one we typically visit. I wasn’t sure what they would do, but the store employees involved the kids throughout the entire trip, and they all had a blast.

We met the class at the store, and the students were all given a name tag that said they were an “honorary partner” for H-E-B.

We started on the produce side of the building, where our guides showed us a bunch of the different fruits and vegetables they have. They asked the kids what their favorites were and explained how good they are for our bodies. All of the kids got a bag of sliced apples to eat while we were talking. They even gave some to a few of the younger siblings who were there.

We discussed the food that is local to the area, as well as the more exotic fruits and vegetables. One of the employees grabbed a brown bag and let all the kids reach inside and feel the fruit there to try to guess what it was. Only one of the teachers knew (I was stumped). They pulled out a dragonfruit to show the students, and they were all amazed!

After the produce section, we moved on to the bakery. Of course, for most of the students, this was their favorite area because they were all given a cookie!! Here, the employees told us about the difference in the sugars in the fruit and the cookies. The fruit has natural sugars while the cookies have added sugar. Then we all had to run in place to get some exercise and work off the sugar they just ate in the cookies!

As we went over to the seafood section, the guy working behind the counter brought out a bowl with a few live crawfish (it is crawfish season here in Texas) for the kids to look at. They didn’t get to eat anything here, I’m sure for allergy reasons, but the kids did all get to touch a live crawfish!

We spent a reasonable amount of time in the seafood section because they all wanted to touch the crawfish multiple times.

From there, we walked over to the deli. When our guides asked what we could get in that area, all of the kids focused on those pizzas in the refrigerator rather than all of the meat and cheese. Once they started passing out a bit of cheese for all of the kids to eat, then they realized that there was more than just pizza here!

They also had a few huge cheese wheels that they let the kids touch. They were all amazed that it was a giant piece of cheese!

The last food section we stopped at was the dairy aisle where the importance of calcium was discussed. All the kids were showing off their muscles to the employees; then they got to try some of the chocolate milk. Tyler was concerned because the last time he had chocolate milk, he didn’t like it. I told him to try again, and he really liked this milk. Of course, almost all of the children enjoyed it so were asking their parents to get that one next time we go shopping!

The last stop on the tour was in the non-food section. Since they had eaten and drank so many different things, all of the kids were given a flosser to clean their teeth while the employees talked about the importance of dental health and personal hygiene.

The Favorite Part of our Field Trip to H-E-B

When we first got to the store, Tyler saw a few of the arcade-style games and begged me to play. I said no because we had to meet the class and I didn’t have any cash on me. Well, his wish came true at the end of the tour. H-E-B has “buddy bucks” that the kids can get from the cashiers when they check out if their parents say they were behaving at the store. All of the students got one and were able to use it on the H-E-B point game at the end.

The points are printed out on stickers, and the kids can build them up to turn in at the end of every quarter for prizes!

After the trip to the store, we all met at a local playground for a picnic lunch and to let the kids burn off some energy. I packed Tyler’s lunch in his handy Yumbox Lunchbox, and we ate together outside. It was a beautiful day, and the kids all had a blast!

I hadn’t even heard of H-E-B stores until we moved to Texas, but it’s been here since 1905! H-E-B is a privately held supermarket chain that’s based in San Antonio, Texas. There are more than 300 stores in Texas and a few in Northern Mexico. The store is called H-E-B for the initials of Howard E. Butt who, in 1919, took over the store that his mother originally opened. H-E-B really came to light for me when Hurricane Harvey hit because of all the relief efforts they fronted. H-E-B donated more than $1 million in disaster relief in the form of free meals, food bank donations, and financial commitments.

When we moved to Texas, I never knew it was possible to miss a grocery store, but I do miss having Publix stores nearby. So when Harvey hit the Houston area, and I saw Publix sending truckloads of food and supplies in, I loved the store even more. But then, just a few weeks later, Irma hit my home state (and hometown) of Florida, and H-E-B returned the favor back to Publix by sending any extra supplies and food they could manage.