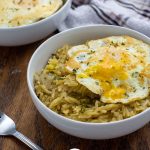 Use leeks and orzo pasta to make a risotto full of delicious herbs and vegetables topped with a fried egg for a hearty and filling dinner.

You may be asking yourself, “What is a leek?” Well, don’t worry, I was wondering the same thing when I first found this recipe in the Cooking Light magazine. But, I love orzo pasta. So Leek Orzo with Fried Eggs was something I wanted to try.

Of course, I had to look up a leek online to see what it looks like so I would know what to look for in the store. And I searched for how to chop a leek. I wasn’t even sure which part of the vegetable we should be eating.

But, that’s also why I like to try new recipes. I get to try new foods that I would have never picked up in the store and learn how to use them. Leeks look similar to green onions but they are much bigger.

To cook the leek, you’ll want to cut off the roots at the bottom (which can be planted to grow your own leeks). Then cut off the dark green leafy tops. Very few recipes call for the tops because they are very tough. I saved them in my freezer bag to use next time I make homemade vegetable broth, which is about the only thing they are good for.

Once you have the edible portion of the leek, you’ll want to make sure you clean it thoroughly. Since this recipe uses chopped leeks, it’s easiest to go ahead and chop the leeks first. Then run them under water in a strainer to clean off any dirt.

The original recipe calls for chicken broth, but I wanted to make mine vegetarian-friendly so I decided to use vegetable broth instead. Plus, I had a lot left from making my own a few days before. It was a good way to use that up as well.

In a medium saucepan, over medium heat, bring the vegetable broth to a simmer with the water and keep this warm.

Meanwhile, chop and clean the leek as described above and chop the yellow onion.

Heat two tablespoons of butter and one tablespoon of olive oil in a large skillet over medium-high heat. Add the onion and leeks and saute for about 10 minutes.

Add the orzo to the pan. Cook for a few minutes, stirring occasionally, to toast the orzo.

Add the wine. If you are using a gas stovetop, you may want to turn off the flame in case of any spills. Cook for another minute or two until most of the liquid has evaporated.

Pour in 2/3 cup of the warm vegetable broth. Cook for a few minutes, until the liquid is absorbed. Continue to add the broth, 2/3 cup at a time, making sure that it’s almost completely absorbed before adding more. Stir occasionally as you add the broth.

Remove the pan from the heat and stir in the parmesan cheese and pepper.

Finally, serve the meal by dividing the orzo mixture into four serving bowls. Top each with a cooked egg, and garnish with parsley. 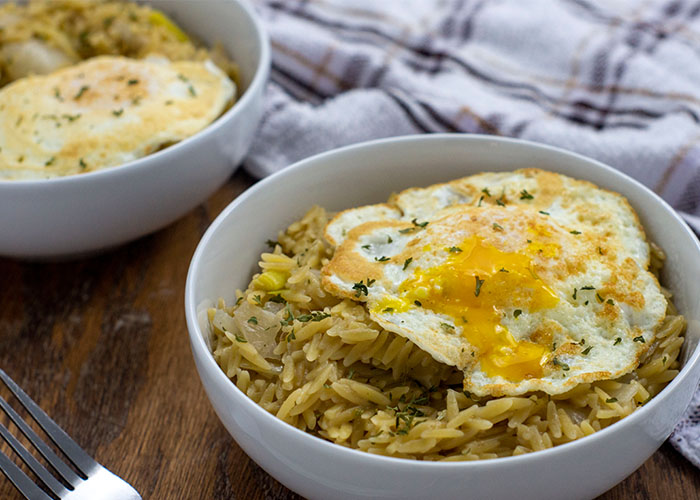