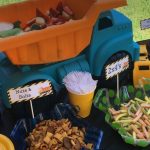 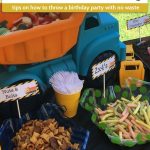 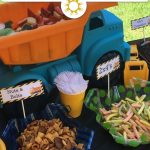 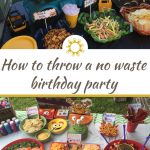 Throwing a birthday party is a great way to celebrate someone, but it can come with a lot of waste. Try these ideas for a No Waste birthday party.

Hosting a birthday party usually requires a bit of planning. We just had my youngest son’s 4th birthday party at our house, and I added a little extra to the planning by making it a No Waste birthday party. Yes, it takes a bit more effort, but can easily be done.

Think about how much waste is created at a birthday party, whether it’s at your own home or you host it out somewhere. There are usually plates, cups, napkins, utensils, tablecloths, decorations, and so much more. Of course, when you have it at your own house, you have a bit more control than you would at a party location since they often provide some of these items.

While you may not be able to control waste that others may bring, such as extravagant gift wrapping, you can do your best to minimize party waste.

The focus of many parties is the food. When my boys pick a theme for their party, I like to focus the food around the theme more than anything else.

To minimize the amount of wasted food, ask for RSVPs. Yes, I know most people don’t tell you they aren’t coming, but many at least give you a “yes” if they will be there. Typically, I plan for that amount of people. Some may show up unexpected, but there also tends to be a last minute cancellation or two.

Plan the party for in-between meal time, so you don’t feel responsible to feed your guests either lunch or dinner. We typically have our birthday party start between 2-3 pm for this reason.

Serve fingers foods that don’t need utensils. Or, limit it to one utensil, such as having all food that can be eaten with a fork. Also, attempt to provide food that can be composted when there are leftovers.

For example, at the birthday party we hosted last week, we had a fruit and veggie tray. All of the extras that we couldn’t save for later were thrown in the compost bin. We also served Rice Krispies treats and peanut butter and jelly sandwiches, both of which are finger foods.

Depending on the number of people you have attending, you may be able to use your regular utensils instead of purchasing plastic ones. We do this when we have our monthly movie club, and just wash everything after our friends leave.

While you can sometimes get away with very minimal utensils by serving finger-foods, everyone needs something to put their food on. Most party stores sell packs of themed and/or colored paper plates for every occasion. But, have you ever noticed the price on these plates? It’s a few dollars for only 6-8 plates most of the time. Rather than shelling out that money for every birthday party, spend a little more on a nice set of reusable bamboo or stainless steel plates.

As for napkins, try having some reusable cloth napkins available, especially if you already have enough in your kitchen that you and your family use on a regular basis. If cloth napkins aren’t your thing, then opt for napkins that are 100% natural materials so you can compost them when the party is over.

Cups can be tricky, but if you have enough regular cups in your house, you should be able to use those instead of paper or plastic cups. And, don’t forget, there are many things that can be used as cups, such as reusing glass jars and mason jars.

Again, similar to the options for plates and cups, it’s often worth the money to invest in a few cloth tablecloths rather than buying the cheap plastic ones for every party. If you can find a neutral color, it can work with almost any party theme. I like to use dark brown or black to also hide any stains. After the party, rather than bunching up and throwing away a plastic tablecloth, your reusable one can go in the laundry.

Did you know that crepe paper streamers can be composted? I found this out when I was searching for ideas for No Waste decorations for Ryan’s birthday party! Even though he was having a Super Mario birthday party, I didn’t purchase any Mario-themed decorations. I used the main colors (red, green, blue, and pink) and got streamers for each of these. Unfortunately, the streamers came wrapped in plastic, but the rolls are large enough that we can use them for multiple parties before we run out.

Yes, I am mentioning food again, because it can be a source of decoration. As I said, we don’t do a lot of actual decorating for the boy’s birthday parties, but I like to have all of the food themed in one way or another. Because of this, the food becomes part of the decoration. For example, for Ryan’s Super Mario birthday party, I made the fruit and veggie trays in the shape of fire-power flowers.

Two popular birthday decorations that create a lot of waste are balloons and confetti. They are fun, yes, but have no purpose and are wasted at the end of the day.

Balloons end up being sent to the landfill, or worse are released into the air which causes many other environmental issues. When a balloon is let go, it climbs high up in the atmosphere. And what goes up must eventually come down. But, along the way, it can prove fatal to birds flying near them. It can get stuck in a tree. The balloon will finally make its way down to the ground where it becomes litter somewhere else, and animals often get tangled in the string.

Confetti can be ok, if it is made of the right materials. Any confetti that is shiny, though, often has plastic or mixed materials, meaning it can’t be composted. If you use confetti, try to find some made from paper so it can be placed in the compost bin. Or, I’ve seen images of people punching holes in dead leaves for an environmentally friendly confetti.

It’s safe to assume that not everyone you have to your party will be others who are trying to minimize their waste. So, knowing that, make it as easy as possible for your guests. It can be overwhelming to know how you want to take care of the “waste” if it isn’t being thrown in the trash.

There are a few options, and the one you choose will depend on what you want to ask your guests to do, and what you will take on yourself.

Instead of asking them to make the decision on what goes in your compost bin, the laundry, the recycle, etc. just pile everything in the sink and take care of it later. Oftentimes, guests will want to help at least take their plates to the kitchen, so have a place to put them. Then, once everyone leaves, you can sort through and separate everything as needed.

37 thoughts on “How to Throw a No Waste Birthday Party”