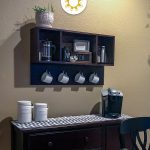 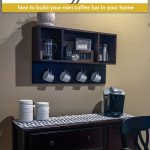 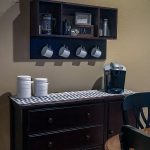 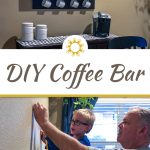 Repurposing furniture in your home is a great way to get started on a DIY Coffee Bar. It’s great for entertaining and organization.

Way back in January, Justin and I made a trip to IKEA. We were looking for a few things for our new game room and also props for photographing recipes. While we were there, a cute French Press kept standing out to me. Every time I saw one in a setup, I liked it. And I don’t even drink coffee. But by the time we got to the warehouse area and I saw it was less than $10 I had to have it. When Justin asked why I told him I was going to do a DIY Coffee Bar in the dining room.

At first, he wasn’t convinced. I had to search some ideas on google and pinterest to show him. Finally, he agreed, reluctantly. So, we bought the French Press. And the project began.

While I started this before COVID, we really got into it when we were at home. We did a lot of projects over the last year around the house. Justin has always worked from home, and his dad teaches ROTC in high school which meant he was teaching from home with a lot of extra time on his hands, too.

Just after Christmas, we helped the boys rearrange their rooms. Ryan got a desk for Christmas, so we needed to make space for that. When we did this, we decided that his old dresser needed to come out of there. His room was changing from a dark brown to white furniture. But the dresser was still good, so I didn’t want to get rid of it. This was the dresser that both boys had as a baby.

So, I moved the dresser to the dining room. And the metal wine rack that was there got moved to our bedroom closet for extra storage. This was the first step in starting our DIY Coffee Bar.

Do you need fancy furniture? Absolutely not! I love how this dresser looks in there. You can always get a hutch that’s made for a dining room. But I prefer using what we have so we aren’t spending as much money.

Once that was in place, we started brainstorming what the rest would look like. I sketched out a simple open-concept boxed shelf for the wall. That was given to Justin and his dad who made it a reality for me. It was simple, but it looks nice on the wall.

Once the boxed shelf was in place, it was time to decorate. I took Tyler with me to our local Home Goods store to have a look around. He picked out a few signs that said “coffee” and “tea” on them. Then we found a few pieces to match those.

When we were at IKEA, we bought a table runner and some white coffee mugs to go with the french press. I knew I wanted a bit of color on the dresser and that’s where the runner came in. The shelf would have to be stained a dark color to match the dresser and our dining room table, so the white coffee cups were able to contrast with that.

I already had a small aloe plant in an off-white planter, so that went on top of the shelf. At this point, we were almost done. But it still seemed like it needed something.

My sister has a vinyl business (you can find her on Facebook HERE) so I had her make a large sign to go above the shelf for me. I designed it and she printed it. Since we have both coffee and tea there, I wanted to incorporate both in the wording. (COMING SOON)

Before, it was a plain area with just a few decorative pieces on the wall. It looked nice, but wasn’t very functional. Now, we have a great area for our coffee and tea.

We made the DIY Coffee Bar for a few reasons:

A lot of things I used were repurposed or built for the space. But, many were also purchased. Since we did this ourselves, I didn’t spend a whole lot on it. Here are links to the exact pieces we have or the closest ones that are currently available:

This was purchased when I was pregnant with Tyler in 2013. It was bought at Babies R Us which is no longer in business here in the US. I looked on Amazon and this is the closest I could find. It’s white and has baskets instead of a cabinet, but it’s close. You may be better off repurposing something if you have it.

Just for fun, here are a few other home projects we completed in the last year. We switched the boy’s playroom to our office. The area that was the office became a game room with a custom-made gaming table and shelves for our massive amount of board games. We added an attic access in the garage and put plywood up there for more storage. The guys built a custom workbench in the garage. Justin’s dad built a show rack that now holds all of our shoes by the garage door.

They also built a playset in the backyard that I designed for the boys including a small rock-climbing wall, tire swing, sandbox, and table. The bricks in the front of our house were mortared so they stay together around the flower beds. I also designed a “charging station” for the office that Justin’s dad built to hold all of the electronics that need to be charged instead of having a mess of cords everywhere.

12 thoughts on “How to Make a DIY Coffee Bar”