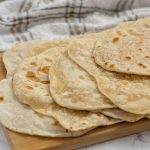 Making tortilla shells at home is much easier than you would think. And with only 4 common ingredients, they can be prepared any night!

Tortilla Shells have such a wide variety of uses. We use them for so many different recipes such as tacos, burritos, quesadillas, sandwich wraps, and they can be baked into chips.

I’ve always bought tortilla shells from the store because I didn’t think it would be easy to make at home. I was so wrong!

In trying to reduce our waste in the kitchen, I’ve been trying to find how to make more things from scratch that we typically buy at the store. Tortilla shells are usually packaged in plastic that can’t be recycled in most places. And since they sit on the shelf, there is usually some type of preservative in them to keep them fresh longer.

The recipe I found and based mine off of uses only four simple ingredients. I was so happy to see that it’s all things that I typically have on hand at all times.

From now on, unless we are in a huge rush, I will probably be making my own tortilla shells for every meal. They only take about 30 minutes and are amazing when they are fresh and still soft and warm.

The first meal we made with the homemade tortilla shells was my Spinach and Artichoke Quesadillas. It added just the right amount of bread to the shells and was amazing! I can’t wait to try them with other recipes.

In a large mixing bowl, sift the flour and salt together.

Then pour in the water and oil. Stir everything together until it starts to form a dough.

Turn the dough onto a lightly floured surface and knead about 10-12 times, or until the dough fully comes together. Then let the dough rest for about 10 minutes.

Divide the dough into eight equal portions. Get them as close as possible to have shells the same size.

Take each portion and roll it out on the floured surface until it is about a 7-inch circle. If you make them a bit bigger, the shells will be thinner, but should still work.

Heat a large nonstick skillet over medium heat. Place one of the tortillas in the pan and let it cook for about one minute on each side, or until it starts to get light brown in color.

Repeat with the rest of the tortilla shells until they are all cooked and ready to eat! 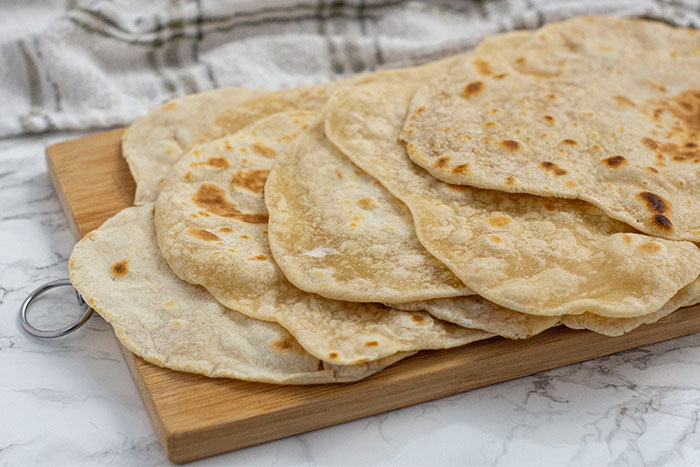 40 thoughts on “Homemade Tortilla Shells with Only 4 Ingredients”