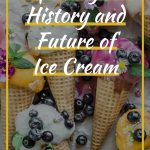 Ice cream is enjoyed by people around the world. But have you ever stopped to think about the history of ice cream?

Today, I have another wonderful post from Georgia Selih regarding the history and the future of one of my favorite desserts: ice cream! I love ice cream and found all of this so interesting to read through. We take so much of our food for granted without thinking about where it came from or how it started.

Ice cream is such an iconic treat so it’s hard to imagine that people used to live without it. But as is the case with everything, the icy sweet had a beginning and an evolution that brought it to where it is today. But where did ice cream start? Who was the first to taste it and what did it even look like thousands of years ago? And just in case you were wondering why on Earth you should be reading about the history of ice cream when you could be on your way to a shop for a sundae, you’ll be surprised by how much knowing the past aids ice cream production today.

Simply put? We’re not sure. There are records that date as far back as 200 B.C. claiming that the Chinese King ate creamy ice cream made out of buffalo milk. However, logic begs to differ, seeing as how the first ice cream would have been a sorbet – snow mixed with honey or fruits. And whether or not you want to make the argument that sorbet and ice cream are two different things, we are left only with speculations as to who was really first. Some stories say that it was Marco Polo who brought ice cream from the east to the west. And others that say Catherine di Medici made it in France. Probably nothing like the ice cream we know today. Snow cones were simple, and they were probably more mildly flavored versions of snow cones we eat today. But milk-based ice cream has a different story. Most sources point to it first being made in China, where there are also first mentions of an ice cream “machine”. Buffalo milk was mixed with flour and camphor from an evergreen tree. Sometimes it was flavored additionally with fruit or herbs. Then was heated up and cooled down in metal tubes or bowls lowered into a bath of ice and salt. This was, of course, a treat reserved only for the highest of royalty and the extremely wealthy. The preparation was neither cheap nor simple.

What was the next step?

Ice cream remained relatively the same until the 17th century when freezing drinks gained in popularity. But it was still impractical to store due to a lack of freezers and was reserved for special occasions. The first American ice cream factory was founded because a milk distributor kept underselling milk and cream. He had to turn it into something else. Even today, you can find an ice cream store that uses all-natural ingredients, locally made and farmed. Just like they did in the old days. With mass-produced ice cream that we have today, which is often filled with chemicals, there is a great difference in taste and quality when natural, fresh ingredients – that first made this treat so popular – are used.

What the future holds

You might think that ice cream today is as good as it gets. But in reality, progress is being made in labs across the world to improve it even further. The phrase “don’t mess with perfection” simply doesn’t apply here. So what are the aims of all this research? Mostly, the question we ask is how do we make our ice cream healthier while preserving the richness we all know and love? Is the next step a complete transfer to frozen yogurt? Because we seem to be eating it all year round, and many opt for it thinking it’s less calorific than ice cream. The main focus right now seems to be ice particle research, since changing their size could cut the sugar and fat content in half. There has also been a surge in home-made ice cream, with home ice cream machines now widely available.

No matter where the ice cream industry chooses to go we are sure to follow. There’s nothing really like hearing the ice cream truck coming down the street. Or sharing a sundae on a hot summer day. Every part of the world has its way of eating ice cream. Whether it’s soft serve, gelato, mochi, or fruit sorbet. This worldwide favorite is a staple in so many cultures, and it would be a shame not to try them all.

Georgia Selih is author @highstylife.com. By nature an artist, by profession a journalist. An irreparable print lover who is enjoying this hot digital affair.

11 thoughts on “Exploring the History of Ice Cream”