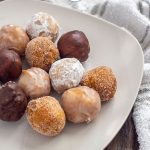 Doughnuts are a favorite for breakfast here and we have figured out how to make our own homemade recipe for a variety of doughnuts.

Who doesn’t love a good doughnut? We love sweet foods for breakfast. But I don’t love all how processed store-bought doughnuts are, so we decided to try to figure something else out.

Justin’s family has made doughnuts from refrigerated biscuits before, so that gave me the idea that we could make some from Bisquick. I make regular biscuits out of it, so why wouldn’t it work for this too? So I made my normal drop-biscuit recipe (without the cheese), and we put them in some oil to fry up. And guess what, it worked!

Once you have them cooked, you have many options for toppings. We usually just shake up the doughnuts in a bag with powdered sugar. You could also make an icing/glaze out of powdered sugar and milk. We also found this recipe for a chocolate glaze that is amazing. It tastes just like the chocolate from a doughnut shop.

Now that we’ve made them a few times, we’ve got the recipe down pretty well. Our original recipe left the dough very sticky, which made it hard to form the doughnuts. Recently we make sure to add more Bisquick into the dough until it’s a better consistency. You want it to be just slightly tacky so that it will roll together well, but dry enough that it doesn’t stick to your hands.

In a large saucepan or stockpot, heat about 3 cups of oil over medium-high heat. We usually use vegetable oil for this recipe. But almost any oil should work as long as it’s good for frying. In a large mixing bowl, combine the Bisquick and milk until a dough forms.

Knead in extra Bisquick as needed until the dough is no longer sticky.

Once the oil is hot, grab small bits of dough, about the size of a golf ball, and carefully drop them into the oil. Cook for about 2-3 minutes until they are brown on the bottom. Then rotate the doughnuts to cook the other side.

Cook another 2-3 minutes until the doughnuts are brown on all sides. Use a slotted spoon to remove the doughnuts from the oil and place them on a cooling rack with paper towels or a rag underneath to catch the oil drips.

After all of the dough has been cooked, place the slightly cooled doughnuts into a zip-top bag or large mixing bowl with a lid and cover with the powdered sugar. Close up the container and shake to coat each of the doughnuts. You could also make a glaze from powdered sugar and milk or a chocolate glaze as linked above. Serve warm. 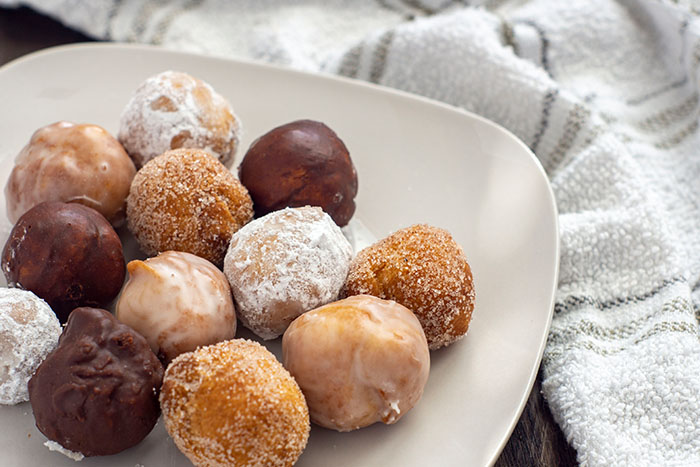 Doughnuts are a favorite for breakfast here and we have figured out how to make our own homemade recipe for a variety of doughnuts.
Prep Time 5 minutes
Cook Time 15 minutes
Total Time 20 minutes
Course:
Breakfast
Cuisine:
American
Keyword:
doughnut
|
fried
|
powdered sugar
Servings: 36 doughnuts
5 from 4 votes