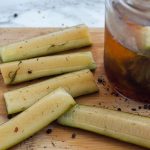 Crunchy, fresh dill pickles are a great addition to any sandwich and are so easy to make. You only need a few ingredients and about 30 minutes!

Dill pickles are the perfect topping for sandwiches and hamburgers, or to just eat on their own. Or at least that’s what I’m told. Personally, I don’t care for pickles, but Justin loves them.

Lately, he and the boys go grocery shopping together. And one day he came home with a cucumber. I asked why, since it wasn’t on the list (I know, I make the list). He said he wanted to make dill pickles.

I told him he was on his own for this recipe since I don’t even eat pickles. I have no clue where to even start, so he took the challenge.

The first thing he did, as we usually do when trying something new, was to look up a few recipes to get ideas. And this meant another quick trip to the store to get a few things. But the ingredients are all ones that you buy once, and they last a long time, other than the fresh cucumber.

At our grocery store, there is a cucumber that’s labeled as a pickling cucumber. Of course, this makes it easy to know what type to buy. If you can’t find one called a pickling cucumber, then you want to look for one that’s firm and unbruised to give you the crunchiest pickles.

This recipe is for a basic pickle, but you could add so many different spices to it to change the flavors to your liking. Justin prefers dill pickles and likes them on sandwiches or with anything bbq flavored. Sometimes he just grabs a pickle or two as a snack.

Start by washing the cucumber and slicing it to the size pickles you want. Justin likes to make long sandwich-sized pickles rather than the flat round pickles, but you can cut them in any way that you want.

Prepare the jars by making sure they are also clean and add your spices to the jar. Justin makes them with sliced garlic, dill, and red pepper chili flakes.

It helps to add the seasonings to the jar first, so you know there is space. Then put the cucumbers in the jars, making sure to pack them in, but don’t squish them. You don’t want to bruise the pickles.

Make the pickling brine by combining the cider vinegar, water, and pickling salt in a medium saucepan over high heat. Bring it to a rolling boil, then remove it from the heat.

Let it cool for a minute before pouring it into the jars over the pickles and spices. Make sure to leave a bit of space in case it expands, and seal the jars.

Wait until everything cools to room temperature, then store the pickles in the refrigerator. They will be good for a few weeks. 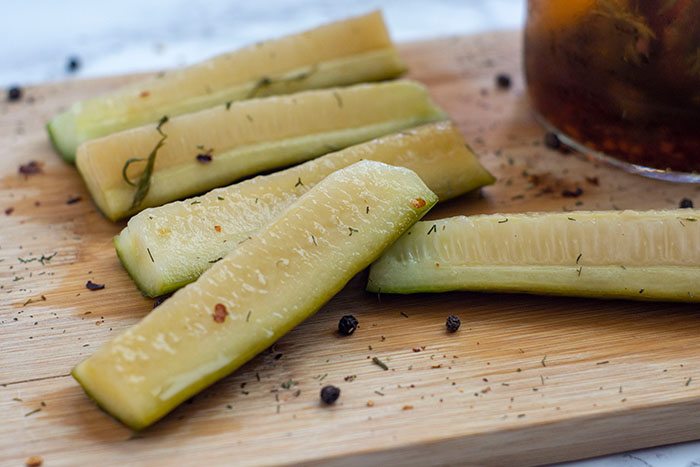 Crunchy, fresh dill pickles are a great addition to any sandwich and are so easy to make. You only need a few ingredients and about 30 minutes!
Prep Time 10 minutes
Cook Time 10 minutes
Cooling Time 30 minutes
Total Time 50 minutes
Course:
Side Dish
Cuisine:
American
Keyword:
cucumber
|
dill
|
pickles
Servings: 8
5 from 6 votes

39 thoughts on “How to Make Dill Pickles at Home”