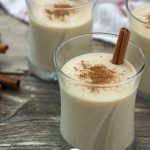 Coquito is a traditional holiday drink in Puerto Rico. Also called Puerto Rican Eggnog, this drink is tropical and creamy, and easy to make!

A few years ago, when I was working at the doctor’s office in Orlando, one of our providers brought in Coquito aka Puerto Rican Eggnog. Since she was bringing it to work, she went extremely light on the alcohol, but it was still delicious!

Although there aren’t any actual eggs in this eggnog recipe, the drink is just as creamy. The recipe that we have calls for cinnamon as the only added flavor. Of course, the coconut adds a lot of flavor of its own, but I think I will try adding a bit of vanilla next time, too. The drink goes really well with my chocolate chip cookies.

The drink has a very tropical feel, which is perfect for Christmas in the South. I remember quite a few years that it was so warm on Christmas day that we would jump in the pool after opening gifts. But, that’s Christmas in Sunny South Florida for you!

Also, this couldn’t be easier to make. It took me about 5 minutes to put it all together. The hardest part is waiting for it to cool in the refrigerator. Justin and I both tried some as soon as it was blended, and it just wasn’t the same as when it’s cold. So, we will be patient, I guess.

When I first read the recipe from my coworker/friend, I wasn’t sure of a few of the ingredients. I searched them on google and realized that she had given me the Spanish name on a couple of items. Once we learned what we were looking for, it was easy to find. Most of your ingredients will be found with the canned milk in the baking section of your grocery store.

This recipe is full of dairy, so if you are looking for a dairy-free version, try Vegan Eggnog.

Gather all of your ingredients. As I mentioned, it’s almost all canned items that can be found with all of the baking ingredients. True Coquito would use Puerto Rican rum, but we had some Bacardi in the pantry so went ahead and used that.

Pour everything in the blender. I needed a spoon to scoop out the cream of coconut and sweetened condensed milk since they are thick. It’s also chilly in the house so the coconut is close to solidifying at this temperature.

Note: If you have a small blender, you’ll need to do this in batches by only adding half of each ingredient. My blender is a 7-cup blender and it was just big enough for everything.

Blend everything together. I used the “mix” setting on mine and it worked really well.

Place a few cinnamon sticks in the Coquito and set in the refrigerator to chill for at least 4-5 hours, or overnight. When ready to serve, mix the Coquito one more time and serve chilled. Sprinkle with a bit of cinnamon or nutmeg if desired, or serve with a cinnamon stick. 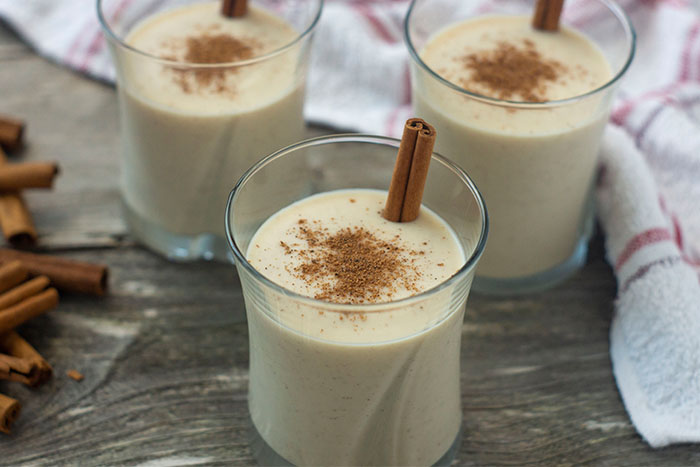