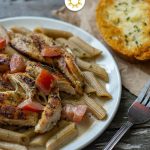 Cajun chicken over a bed of pasta with a creamy sauce is close to the delicious recipe at Chili’s restaurant that you can enjoy from home!

One of Justin’s favorite chain restaurants is Chili’s, and he often gets the cajun chicken pasta meal. I’ve never tried it because I’m always afraid it’ll be too spicy for me since cajun food usually has a kick. So one day he suggested we try to make it at home so I can control how much seasoning is on everything.

Since I hadn’t ever eaten the meal before, I had no clue what was in it. I had to search online for other copycat recipes and make it our own from there. Even with the spices, I enjoyed this meal and will be making it again for sure. I don’t know if I’ll ever order it out since I can’t control the spiciness, but I’ll make my own.

I was pleasantly surprised at how creamy the sauce is. The name, Cajun Chicken Pasta, doesn’t really tell you anything about the sauce. I made this with half-and-half but may try it with heavy cream next time to give even more texture to the dish. Overall, though, this was delicious on the first try!

At Chili’s, you have a choice of sides. We decided that making some homemade Texas Toast would be a great side dish. I made it similar to THIS toast recipe, only I broiled the toast instead of baking it.

Start by cooking the penne noodles as directed. Penne is the type of noodles that Chilis uses. I don’t cook with penne often, but it was necessary for this meal. In this dish, I really liked them!

While the noodles are cooking, dry the chicken breasts off and coat them with your cajun seasoning. This is where you control how much kick the dish has. If you like a lot of spice and bold flavor, thoroughly coat the chicken. If you are like me and like it a bit lighter then just dust the chicken with seasoning. Heat one tablespoon of butter in a saute pan and cook the chicken until it is cooked through, flipping at least once. Remove the chicken from the pan and keep it covered.

Add two more tablespoons of butter to the pan and let it melt. Then add the half-and-half, garlic powder, salt, and pepper.

Whisk the sauce together then add about 1/3 cup of the parmesan cheese and heat until the cheese has fully melted and the sauce is bubbly.

Toss the cooked pasta noodles with the sauce along with the diced tomatoes.

Divide the pasta and tomatoes among the serving plates. Slice the chicken and add that to the top of the pasta then garnish with parmesan cheese, and parsley. 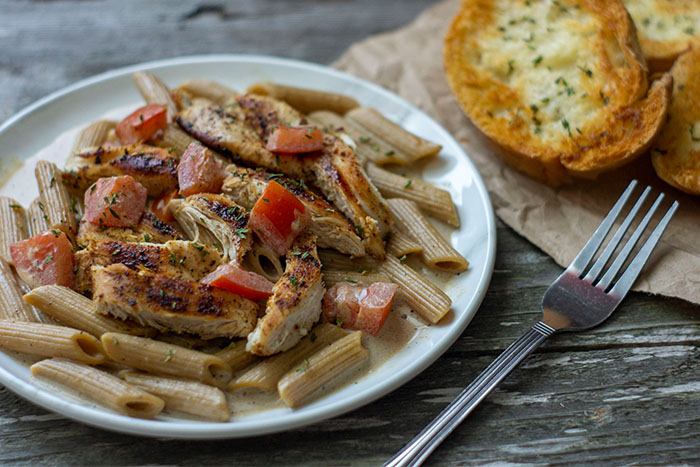