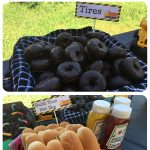 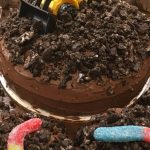 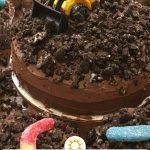 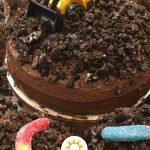 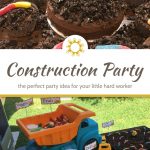 This past weekend was my youngest son’s second birthday party. He loves watching Bob the Builder and anything to do with construction trucks. Well, really, any vehicle, but especially dump trucks and concrete mixer trucks. So we decided that it would be a great party theme for his birthday. I started trying to gather ideas and what we could do on a budget for his party. And stuff that would be appropriate for a 2 year old birthday party.

We had a few neighbors and friends over, and Ryan had a blast. He and Tyler went to my in-laws for a couple of hours before the party so we could get everything done and set up. Tyler had a soccer game that morning, so we were limited on the time we had to get everything ready. As I usually do, I baked the cake and cupcakes the night before so they would be completely cool and ready to frost the day of the party.

For his cake and cupcakes, I made some dirt cupcakes and put a bulldozer on top of Ryan’s cake. Although I should have put the worms on his too, he was stealing the worms off the extra cupcakes!

Instead of a traditional gift table, we used a wheelbarrow. It was a great way to keep the theme while having a place for gifts. Since we are limited on table space, this also saved the space we needed for food and cakes.