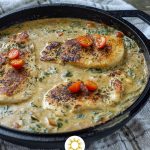 Pan fry chicken then smother it in a cream sauce with tomatoes and spinach for an easy meal using only one pan and 20 minutes!

“The best-laid plans… often go awry.” That could be the quote of the week for our kitchen. Some nights, no matter how hard we try with the meal plan and calendar reminders and thawing meat ahead of time, dinner just doesn’t happen the way we want. That’s how we ended up with our meal of chicken with tomato and spinach cream!

Those nights of “I know we planned this meal but I really don’t feel like cooking/eating that” tend to be when we come up with some of our best experiments! And this meal came from such a night.

I had taken some chicken out of the freezer to thaw and make Chicken Fried Rice, but that sounded like so much work that night. So we started with the idea that we would make a chicken meal so it doesn’t go to waste. We searched the refrigerator for any other leftovers that needed to be used up.

We found some grape tomatoes, spinach, and heavy cream. Add in some parmesan cheese, seasonings, and chicken broth and we had the start of a decent meal here.

In the end, we realized this meal is similar to Chicken Basil Cream, only we didn’t use basil. We joked about calling it “chicken parsley cream” since parsley is our main herb, but that would be too confusing. So, we went with the longer but more descriptive Chicken with Tomato and Spinach Cream.

Since we weren’t quite sure what the end results would be as we were making it up as we went along, we did not end up with any sides. In the future, I would make it with some noodles (to put the sauce over) or a loaf of French bread to dip in the sauce.

Heat 1 tbsp of olive oil in a large skillet over medium heat. Place the chicken in the pan, then season with salt, pepper, and 1 tbsp of parsley. Cook the chicken, flipping as needed until it’s cooked through.

Meanwhile, cut about 1/2 cup of grape tomatoes in half. Chop the spinach if you prefer it smaller in the cream. I like to use my kitchen shears to quickly and easily cut the spinach leaves into pieces.

When the chicken has finished cooking, remove it from the pan. Saute the spinach for about 2-3 minutes, until it has wilted, stirring constantly so it doesn’t burn to the pan.

Add the grape tomatoes and stir for 1-2 minutes.

Pour in the chicken broth and heavy cream. Stir occasionally until it’s warm, about 2-3 minutes. Add 1 tbsp of parsley and bring to a boil.

Whisk in the parmesan cheese. Lower the heat and simmer for 3-5 minutes. until the cheese has melted and the cream thickens slightly. Return the chicken to the pan and flip to coat. Serve immediately while it’s warm. 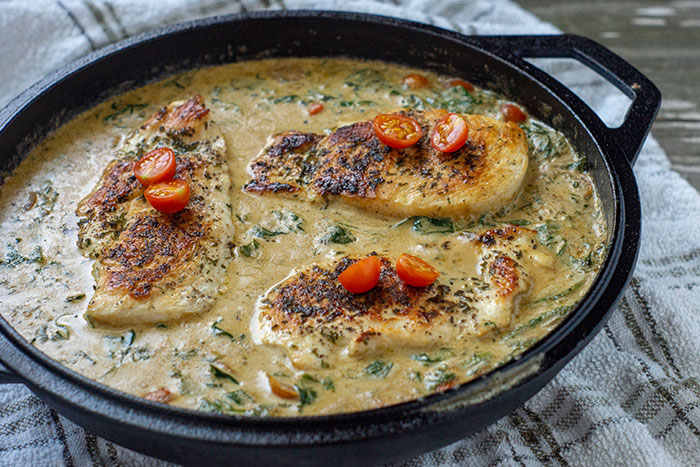 Chicken with Tomato and Spinach Cream

48 thoughts on “Chicken with Tomato and Spinach Cream”