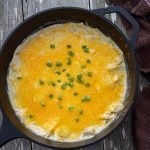 Instead of trying to roll a bunch of enchiladas, spend less time making this Chicken Enchilada Skillet while still enjoying the same flavor.

When we go out to eat at our local Tex-Mex restaurant, one of my few go-to meals is the chicken enchiladas. They are so creamy and cheesy and rolled into a tight little corn tortilla. I’ve tried to make my own at home before, but I usually can’t get the enchiladas tight. Or, if I do, they tend to come apart when they cook and it just makes a mess. So making a chicken enchilada skillet has been my go-to lately.

I saw a photo of a skillet enchilada meal, so I decided to give it a try. Of course, without having a recipe to go from, I was winging it a bit. The boys weren’t so sure about the meal. Tyler said he didn’t like it but didn’t not like it either. Ryan was willing to eat the chicken but didn’t like the tortilla pieces in it.

Even though the boys weren’t keen on the meal, Justin and I really enjoyed this dinner. Honestly, I liked it a lot more than I thought I would. Typically, I like bold flavors, but this was subtle.

The cream had a lot of flavor and was different than anything else I’ve had before. Normally, I don’t like when chips or anything similar (like the tortillas in this recipe) get soggy. But they didn’t feel like that in this dinner.

In a large cast-iron skillet, melt the butter over medium heat. Once the butter has melted, whisk in the flour.

Pour the chicken broth into the pan and whisk until it is smooth and starts to thicken. Turn the heat to medium-high for cast-iron pans.

Stir in the salt and oregano.

Cut the tortillas into small triangles and place those in the pan. Give everything a stir until the chicken and tortillas are covered with the sauce.

Layer the shredded cheese on top of everything and try to cover as much as possible. We really like cheese in our house, so I added a bit extra.

Cover the pan again and let it cook on low for about 5-10 minutes until the cheese is melted and bubbly. 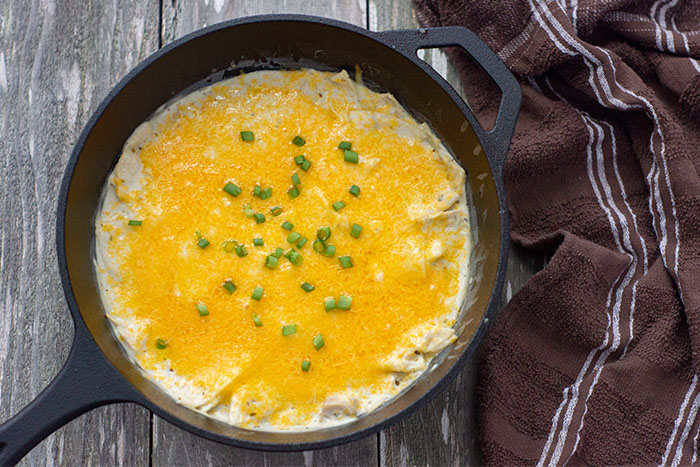