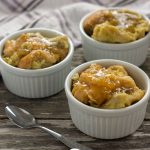 Use your slow cooker to make sweet Bread Pudding, a delicious, easy dessert for your next holiday gathering!

Bread Pudding is one of those foods that I’ve had at holiday events, but never thought of making myself. I know it’s a traditional food in some homes during this time of the year, but it wasn’t with my family.

Every year since Tyler started preschool, we go to the Breakfast with Santa event at the church, and this year is no different. And every year, they have bread pudding as one of the many options.

Bread pudding can be savory or sweet. I’ve only ever had it as a dessert, and I don’t know how it would be as a main course.

Bread pudding is made in many different countries. Each of them has its own unique variation to the dish. Stale bread is the base of bread pudding. Then the bread is topped with milk and eggs. Soak the bread in the liquid and mix with any other ingredients and bake.

Well, most of the time it’s baked. For this recipe, I decided to use the slow cooker. It made it quick and easy and was ready in a few hours. Plus, it didn’t take up space in the oven which can be scarce if making this with your holiday meal.

I decided to make mine simple for the first attempt, and it was delicious! We used the regular base of eggs and milk, then added in a bit of sugar, cinnamon, and vanilla extract. I didn’t want to try too much at first since I had never made bread pudding before. Then, Justin and I topped ours with some pure maple syrup to add a bit of sweetness.

We made it again as a dessert for our Friendsgiving meal. I used almond milk so it was safe for my dairy-allergy friend. Justin found a recipe for a delicious whiskey sauce that was also dairy-free to go on top. I still like the maple syrup, but the sauce was good, too.

Cut the French bread load into cubes, about 1-2 inches square.

Put the bread in the slow cooker.

In a large mixing bowl, beat the eggs. Add in the milk, sugar, cinnamon, and vanilla.

Pour the egg and milk mixture over the bread. Mix everything up to make sure that all of the bread has liquid on it.

Cover the slow cooker and cook on high for about 2.5-3 hours. Take the lid off for about 20 minutes to cool. The bread pudding will also deflate during that time. Serve warm with any desired garnish, such as powdered sugar or maple syrup. 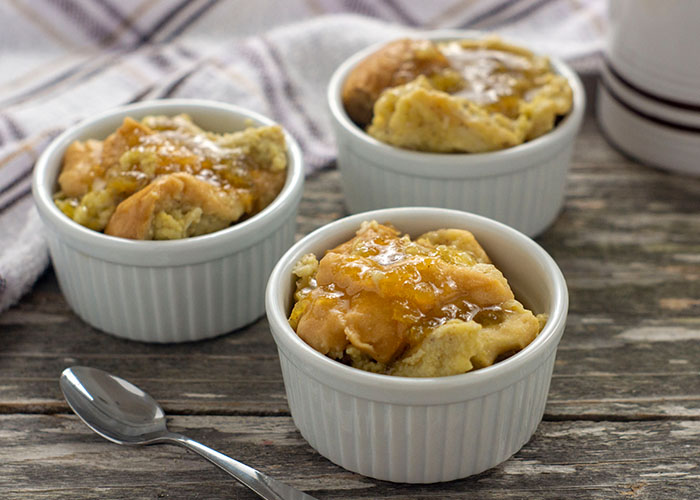 Bread Pudding in the Slow Cooker

34 thoughts on “Bread Pudding in the Slow Cooker”