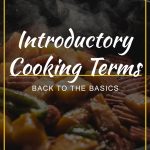 When you start out cooking, there are a few basics cooking methods that you need to know how to do to prepare even the most basic recipes.

When you start out cooking, or even if you are a seasoned chef, it’s good to know what the basic cooking terms mean so you can prepare your recipe correctly. Some of these may seem simple and obvious. But remember we all have to start somewhere.

When I first started cooking, I knew a few of the basics from watching my dad cook. But as I continued to expand my recipe repertoire and cooking more often from home, I had to learn some of the slightly more complicated methods.

For now, let’s start with 4 basic methods and 2 advanced terms.

Bake: to cook by dry heat in an oven or on heated metal or stones

In my opinion, this is the easiest cooking method since you don’t have to do much at all. When you bake something the oven does most of the work for you. You have to prepare the food for baking, but the actual act of baking is simple.

When you want to bake a recipe, it helps to preheat the oven. Set it to the correct temperature about 15 minutes before you plan to put your food in the oven. Always remember that oven temperatures can vary. So keep an eye on your food so it doesn’t burn. I always suggest setting your timer for the shorter time in the range and checking the food. You can cook it longer if needed, but you can’t uncook it!

Boil: to change from a liquid to a gaseous state, producing bubbles of gas that rise to the surface of the liquid, agitating it as they rise

The second easiest way to cook food is to boil it. Boiling is done on the stovetop, in a saucepan, usually over medium-high to high heat. Many foods, such as pasta, are boiled in water to soften or cook, but you can boil in any liquid.

Boiling is done to get the water to high heat to cook foods, as with pasta or hard-boiled eggs. When you are boiling soups, stews, and other similar recipes, you are boiling to war. But also to agitate everything so that it mixes well together.

Fry: to cook in a pan or on a griddle over direct heat, usually in fat or oil

There are so many things that you can fry, and it doesn’t always have to be foods that aren’t as healthy. Yes, you can make some deep-fried chicken wings and cover them with batter and oil. Or frying can be used to make something like chicken fried rice which is much better for you overall since it is packed with vegetables.

No matter what you are frying, be careful of the oil and grease that spits or pops from the pan. I’ve had it hit me many times and it stings for a few seconds. Make sure to be very careful that kids stay away from the stove area when frying because the oil can cause serious burns.

Also, when frying, know the number one safety rule: If a grease/oil fire starts DO NOT put water on it!! Turn off the heat, try to cover it with a lid or another pan to smother the fire. If you can’t do that then throw baking soda on the fire to extinguish it. You should also keep a fire extinguisher near the stove for emergencies. But not so close that a fire would prevent you from getting to it (such as in the cabinet over the stove or directly next to it).

Grill: to broil on a gridiron or other apparatus over or before a fire

When I think of grilling, a summer backyard barbecue comes to mind. We love to grill hamburgers and hot dogs, steak and shrimp kabobs, chicken, and anything else in the summer. In south Texas, the summer is basically from March through October, so we get a lot of time to use the grill.

A grill will be fueled by either charcoal or propane. The one you use depends on your preferences in flavor and maintenance. A charcoal grill gives you that freshly-grilled taste. But it’s not as easy to regulate the temperature of the heat and takes more effort to clean when you are done. A propane grill doesn’t have as much flavor, though it’s easier to cook on because you can turn the flame higher or lower to set the right temperature and all you have to clean afterward is the griddles.

Grilling isn’t limited only to the typical barbecue grill, but can also be done over a firepit or campfire. Anytime you are cooking something on a slotted griddle over a flame, you are grilling.

Poach: to cook (eggs, fish, fruits, etc.) in a hot liquid that is kept just below the boiling point

There are two types of poaching: shallow poaching and deep poaching, which are defined by the amount of liquid the food is submerged into when cooking. Poaching is a good method for foods that are delicate and could easily fall apart or dry out if they are cooked in other ways. Poaching food is generally a healthy option since you don’t use fats to cook.

Shallow Poaching is good for meat that is boneless and naturally tender. To do this, smear your pan with butter and add any aromatics to that pan (such as rosemary) then place the meat on top. Fill the pan with cold liquid until the meat is partially submerged. Use medium heat so the liquid doesn’t ever reach its boiling point, but stays close to it.

Deep Poaching is done in a similar way to shallow poaching, but the food is completely submerged. Add enough liquid to cover the food and any spices, but make sure there is enough space for the liquid to expand as it cooks.

Typical poaching liquid depends on the food being cooked. Eggs are cooked in water and vinegar. Fish is cooked in white wine. Chicken in a stock. And fruit in red wine.

Blanch: to scald briefly and then drain, as peaches or almonds to facilitate removal of skins, or as rice or macaroni to separate the grains or strands

Blanching foods can be done for a variety of reasons, but I’ve used it for two very different things. We’ve had some extra vegetables that we wanted to freeze to use for later, and everything I found on the subject suggested to blanch them first to help preserve the color, texture, and flavor by stopping the decay process. I’ve also blanched almonds to make it easy to remove the skin before using them in other recipes.

To blanch a food, bring a pot of water to a rolling boil. Submerge the food for whatever time interval is needed (depending on what you are blanching), then remove it from the boiling water and immediately plunge it into ice cold water. You want to make sure to halt the cooking process. Once it’s cool enough to handle you are done!

17 thoughts on “Back to the Basics: Introductory Cooking Methods”