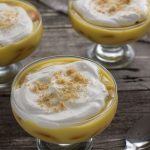 A slight twist on classic banana pudding including plenty of fresh banana slices and nilla wafers, with pudding inside and cool whip on top!

One evening we had a bunch of bananas and weren’t sure what to do with them. Justin said he really wanted some good banana pudding. Well, I had never made it before so I had no idea where to even start, besides bananas and pudding.

So I took to the internet and started looking up recipes. As we usually do, we mixed a few of them together and came up with our own recipe. It’s so tasty and so refreshing. It also is great to bring for a dessert when you need to bring a dish to share somewhere. Or of course, keep it for yourself like we tend to do!

The banana pudding will stay good for a few days in the refrigerator, but after that, the nilla wafers start to get a little soggy. Justin doesn’t mind that, but I have a ‘texture thing’ and can’t eat soggy chips or crackers, yuck!

Edited to add: When your silly child decides he wants a Banana Party for his birthday, this is a great dessert to make as well as a delicious banana cake. This pudding was the first thing gone because everyone was going back for seconds and even thirds!

Pour both of the mixes in a large bowl with the required amount of milk, which should be 5 cups total. Use a whisk to combine the milk and pudding, beating until it starts to thicken. While you are preparing the rest of the recipe, it helps to give the pudding a quick stir every so often so it doesn’t get too thick.

Meanwhile, arrange half of the nilla wafers in the bottom and up the sides of the serving bowl. You want to have a good base layer of the cookies. And trust me, get the brand name, they taste so much better! Then top the cookies with a layer of sliced bananas.

Pour half of the pudding on top of the wafers and bananas. Carefully spread it around so it is flat on the top without moving the bottom layers as much as possible.

Repeat the layers of cookies, bananas, and pudding, making sure to save a few bananas and cookies for your topping.

Let the pudding set in the refrigerator for a few hours before serving so the pudding has time to stiffen. Cover the top layer of pudding with whipped topping once cool.

You can leave it just like this, or get fancy by adding some bananas and crushed nilla wafers to the top of the pudding. It depends on if you are going for presentation or just flavor! 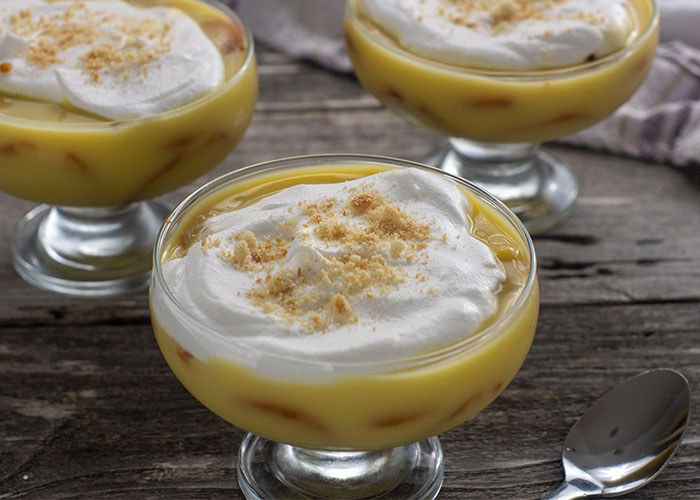