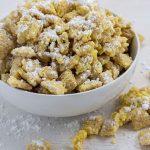 Breakaway from the traditional puppy chow (also known as muddy buddies) recipe and add some banana cream-flavored flair to your snack!

Puppy chow was a huge hit at Tyler’s birthday party. So I knew I wanted to make something similar for Ryan’s banana birthday party. Tyler had a Paw Patrol party, so the flavor didn’t matter. I wanted it to be a “puppy chow”. I found this recipe for a birthday cake flavor and tried it out. But then he decided he wanted a Banana Party. With that in mind, I changed to a banana cream puppy chow.

As I was scouring Pinterest for the slightest sign of anything I could do for a banana party, I came across a recipe for a banana creme muddy buddy (also known as puppy chow). I quickly saved that and kept on searching. I can tell you, there aren’t many ideas out there for banana birthdays.

What is puppy chow (besides food for your dog)? It’s when you have Chex cereal and cover it with some coating that will hold it all together (chocolate, peanut butter, etc.). Then it’s dusted with something powdery such as powdered sugar or cake mix.

No matter what you call it, the basic recipe is the same. I’ve also learned that it’s best to get the Chex brand cereal because it holds together better. The first time I made this I used the store brand, and the pieces were all falling apart as I stirred it together.

Some recipes for puppy chow tend to hold up better, but unfortunately, this is not one of them. Banana Cream Puppy Chow is absolutely amazing the day that it’s made. But by the next day, the cereal gets really soggy. Make sure this is one of the last foods you make before serving as it’s best fresh.

Measure out the cereal in a large mixing bowl and set aside. You want this ready to pour the chocolate into before the chocolate hardens.

In a small saucepan, combine the butter, white chocolate chips, and sweetened condensed milk. Heat this over medium heat and stir continuously until all the chocolate has melted and the mixture is smooth.

Remove from the heat and add the pudding mix, stirring until combined.

Pour the chocolate mixture over the cereal and stir very gently to coat as much of the cereal as possible.

If your bowl is large enough and has a cover, add the powdered sugar and toss to coat. If you’re like me and didn’t think ahead, grab a ziptop bag and put half of the cereal and half of the powdered sugar in (I couldn’t fit it all in one bag). Pour it into your serving dish and serve immediately. As I mentioned, this doesn’t keep up well. But if you have leftovers and want to try to keep them, store it in an airtight container. 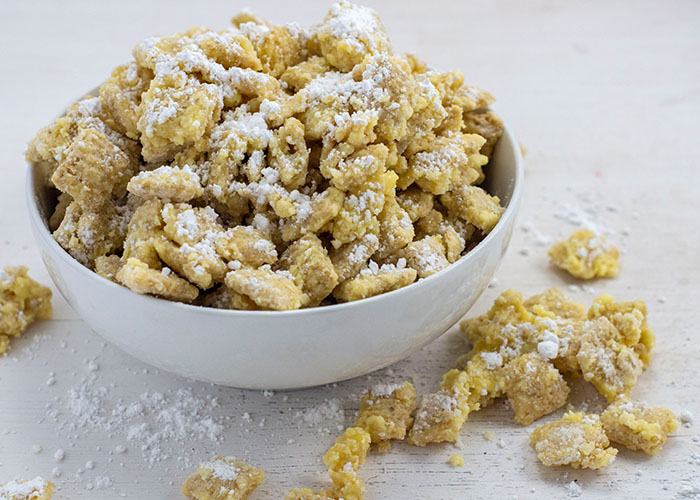